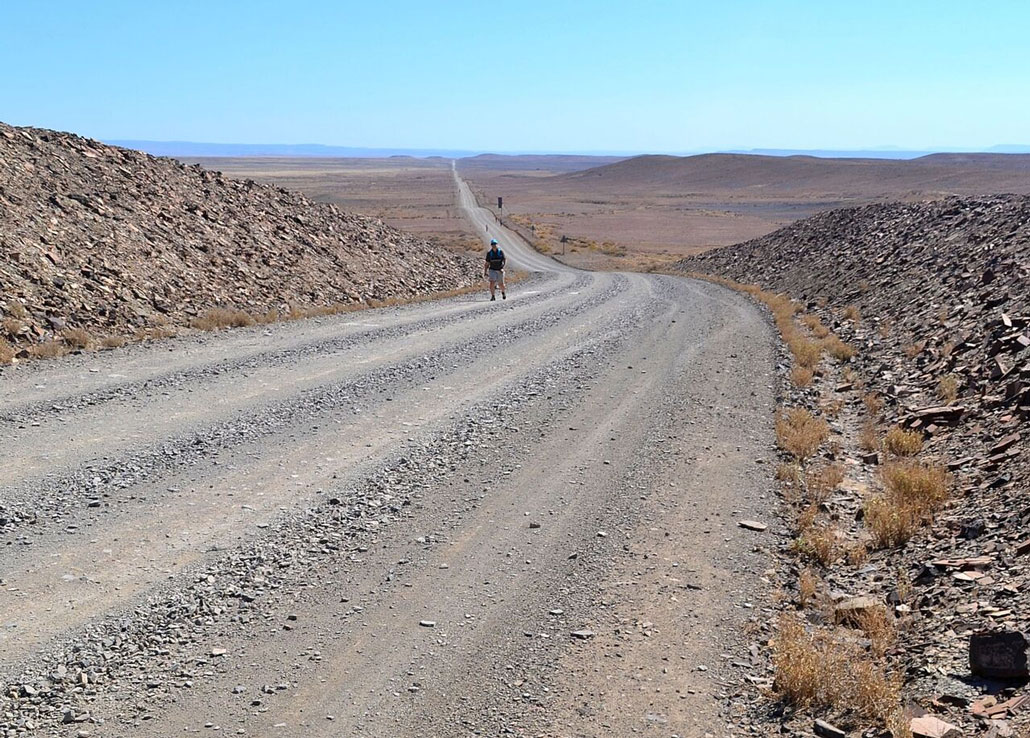 The 136.2 km Hantam Enduro is a seven-day, gravel road hike from the farm Tierhoek to the farm Onder-Downes, some 18km from Calvinia. This enduro will take hikers through one of the most unique areas of our country, the “Agter-Hantam”. It is, without doubt, a magnet to those seeking wildflower extravaganza, where the surrounding landscape erupts into a profusion of flowers that is unsurpassed anywhere in the world.

For the remainder of the year, the landscape is harsh and endless, yet beautiful in the symmetry of the Karoo “koppies” topped by “kokerbome” and the characteristic shades of grey.

Spring (August-September) in the Hantam is a great time to visit. It is, however, still quite cold in the evenings and early mornings. This is a low rainfall area with 50-125 mm per year in the winter (May-August). Temperatures can vary substantially. Summers are very hot and winter nights can be maliciously cold.

Some of the points of interest en route include:

The farm Tierhoek has been in the Van der Merwe family for six generations. Its original name “Tijgerhoek”– literally Leopard’s Corner – is mentioned in the writings of a German doctor named Henry Lichtenstein who visited the area in 1802. Lichtenstein traveled in South Africa and wrote about “the very friendly reception in the house of a colonist by name Van der Merwe”.

The Kokerboom or quiver tree belongs to the group of plants known collectively as Aloes. Both Afrikaans and English names are derived from the San people’s practice of making quivers from branches of the trees. There are three quiver tree species: 1. Aloe dichotoma or Kokerboom with its divided branches has a vulnerable status. 2. Aloe Ramosissma, the maiden’s quiver tree is endangered. 3. Aloe Pillansii, the giant quiver tree listed as critically endangered by IUCN. All three can be found in the Northern Cape and Namibia.

Toren: The farm, Groot Toren was owned by Louw descendants for roughly a century. It is about 45 km northwest of Calvinia. Groot Toren, directly translated from Dutch as ‘Big Tower’, was named after the high mountains situated next to it.

The Toren Murder: Petrus Pienaar traveled north of the Cape in the late 1700s to find good land for his farming. He settled on the beautiful farm speckled with flowers, called it Groot Toren, and developed it for 15 years along with his wife Jacoba, a prominent member of the local community. They had a daughter named Hester Josina. On a night in 1795 their farm foreman, Jager Afrikaner, a man of bushman origin, appeared at the door of the main house at Groot Toren. Following a short exchange of words, Afrikaner shot Pienaar and his family.
Afrikaner thought he had killed all of them, but the thirteen-year-old daughter Hester Josina survived. She played dead until he had left. House servants found her alive the next day. She recovered her health and eventually left the area to go back to her remaining family in Tulbagh. Afrikaner fled up towards the Orange River and established himself in what is now Namibia.

Akkerendam Nature Reserve: Just north of Calvinia, the 2 750 hectare Akkerendam Nature Reserve provides access to the Karee Dam and the mountain slopes of the spectacular Hantam Mountains. Ranging in elevation from 1 050 meters above sea level to the peak of the Hantam Mountain at 1 669 meters, the reserve was proclaimed in 1962, making it the oldest proclaimed nature reserve in the Northern Cape.

This endurance hike will take on the same format as the Tankwa Camino (slackpacking hike with the full support team) and will be 120 km in distance (more or less 20 km a day).